Creative Biolabs remain focused on recombinant antibody, and is committed to being better, not just bigger.

Recombinant antibodies (rAbs) have been widely applied in the field of biological research, diagnosis and therapy based on their unique advantages. Without immunization and screening process, antibody gene sequence is cloned and expressed in vitro via cellular expression system. Currently, mammalian cells are the preferred system for large-scale production as the rAbs produced are biochemically similar to human forms. 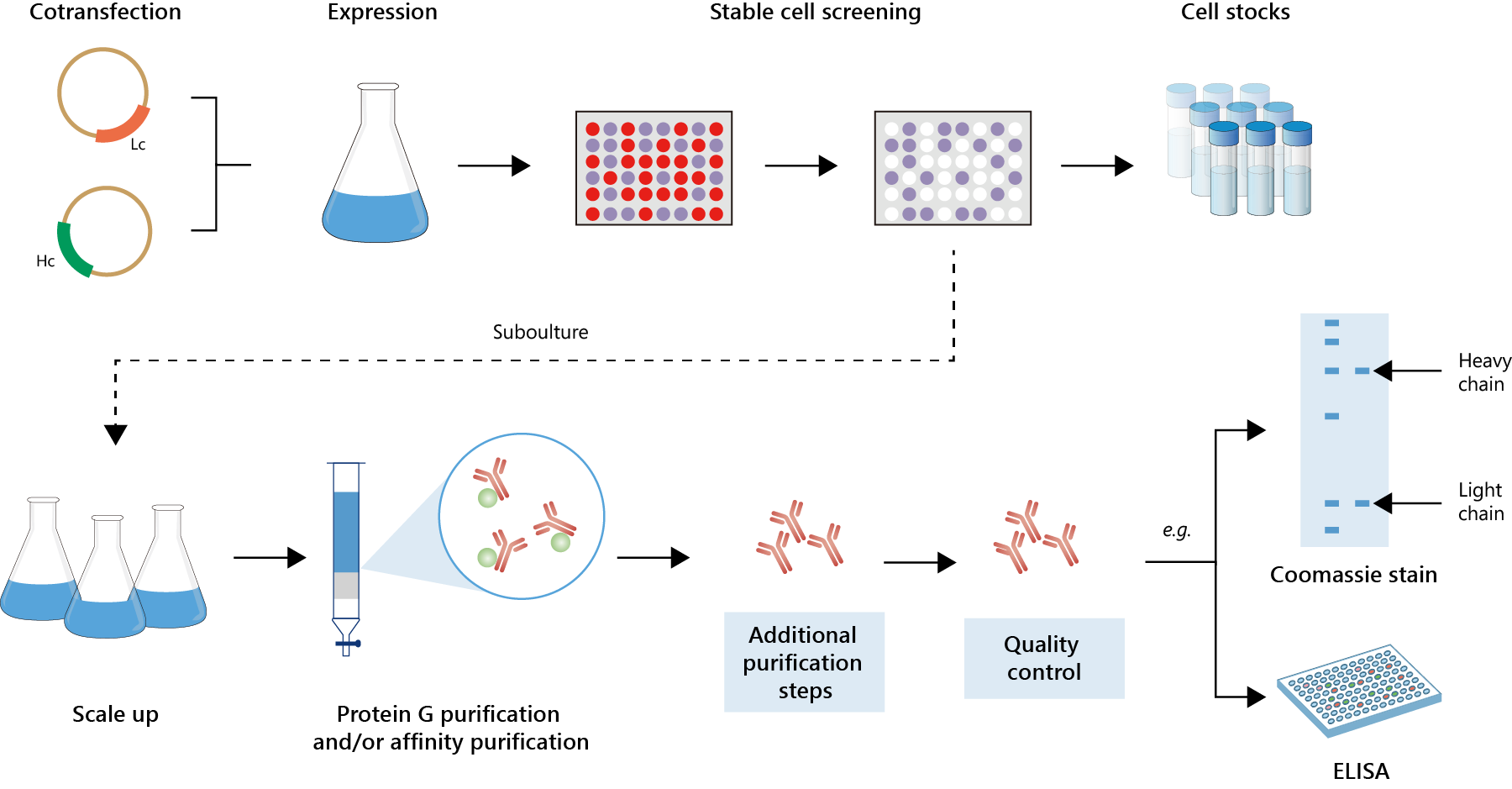 Transient Expression HEK293F cells (293F) were suspension-cultured routinely in medium. On the day of transfection, the cells were analyzed to determine the density and viability. Only if the viability is higher than 95%, the following procedures will be conducted, otherwise, the cells will be cultured and adjusted to reach the criteria before transfection. The cell density was adjusted to 1.0×106 cells and were transferred into a 250 mL suspension culture flask. Antibody DNA vectors and PEI were mixed and incubated at room temperature and then the mixture was added to 293F cells.

After 24 hours of suspension culture, sterilized VPA solution was added to the cells, and 48 hours after transfection, 10% PeptoneN1 was added. The cells were monitored daily by cell counting to determine cell density and viability. On day 6, the cells were harvested for purification.

Purification The cell culture supernatants were gathered, centrifuged and filtered. Then the supernatants were loaded to protein A column. The following steps follow in turn: binding, washing (PBS buffer), eluting (Sodium citrate buffer) and collecting (Tris-HCl buffer). The collected fractions were dialyzed against PBS buffer and filtered through a 0.22 μm filter sterilizer. The final concentration of the antibody was determined with Nanodrop.

Purity Determined by SDS-PAGE SDS-PAGE (electrophoresis on polyacrylamide gel containing sodium dodecyl sulfate) was carried out in reduced and non-reduced conditions. At reducing conditions, the antibody sample was mixed with reducing buffer and heated in boiling water, while for non-reducing sample, the antibody without further heating and in non-reducing buffer. These samples were loaded to the flat gel and electrophoretic band were determined by image analysis software. Generally, the purity of antibody is more than 90%. For more than 95% purity, it was determined by HPLC analysis.

For more antibody information refer directly to recombinant antibody advantage. If you have any questions or any requirements, please feel free to contact us.

For research use only, not directly for clinical use.
Send Inquiry